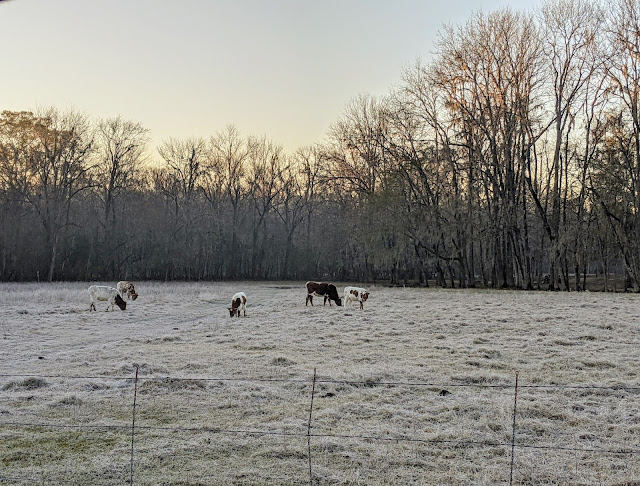 We have been blessed this year in that we did not need to start feeding hay until this week.  Last year, we started feeding in late September/early October because of the severe drought that started late in the summer.  I was never concerned about how much rain we had, until I had livestock and needed to start buying hay!  This year, I was watching the rainfall.
Talking about precipitation, we usually don't get snow here in central Alabama.  Earlier this month we did have a beautiful frost accompanied by clear skies.  These photos were snapped early that morning on my way to work. 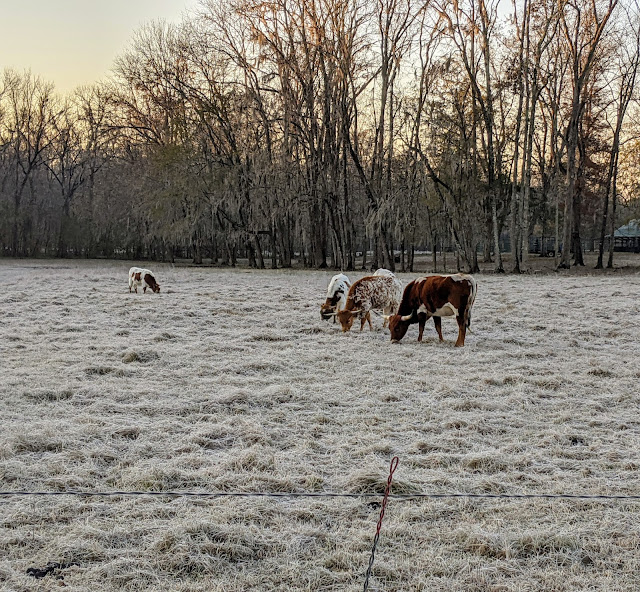 An Escape - or Maybe Not

I heard bellowing yesterday afternoon when I got home from work. It didn't stop, so I thought I should investigate. Sure enough, one of our cows, it was Jane, had crossed over the fence line and was in the neighbor's woods. She left her calf behind, along with the other cows and the bull. Then she stood there bellowing. Now, why did she even go over the fence when she had good grass, water and shade, everything she could ever need or want, right where she belonged? I guess she's illustrating traits we humans sometimes have... Like they say, the grass is greener on the other side of the fence. NOT!
I called my dad and let him know about the cow, and to ask for his help.  Although I had taken a rope and a buggy whip with me, I had failed to take any range pellets (those things are worth their weight in gold!).  After picking him up at the creek, we raced back to the back property line, bribed the rest of the herd away from the fence with pellets, tried to find a break in the fence line where the cow went through, and then pushed down the fence and led the cow back over.  Once that was done, we raced back to the barn for tee posts, back to the back fence line, and I held the fence while my dad drove the posts in -- by the light of the headlights from the trail wagon.
Crazy cows!  Gotta love 'em. :)
at June 19, 2020 No comments:

We have too much of a good thing!  It's always sad to see any of our animals go, but we would like to sell some of our "original" cows so we can keep their fabulous looking daughters.  We are also selling two of our bulls, making room for a new bloodline.

We will sell individual animals, more than one, or the whole lot.  You decide.  Note that we have not bred back our cows.  We plan to do that in June, unless you make an offer in May. If you are interested in breeding to one of our bulls, let us know; we'll keep your cow for you for an additional period of time.

Check out our Sales Pen page for available animals.  We can't wait to hear from you!

You can reach us on Facebook here (send us a private message) - https://www.facebook.com/GBCLonghorns/

Our e-mail address is gbclonghorns@gmail.com

How to Measure a Longhorn's Horns 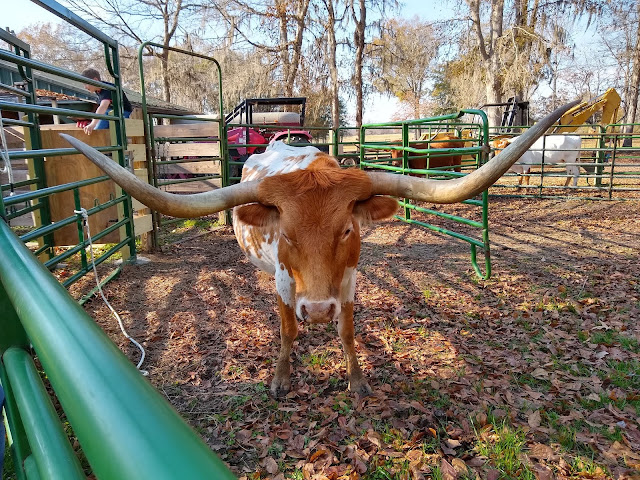 So, how do you measure a longhorn's horns?  Very carefully!  Although most of our longhorns are very docile, we do have a skittish one every once in a while.  Overall, with a man on each side of the chute, my dad pushing them into the squeeze chute (did you know you can twist a cow's tail and she'll go in fairly easily?), and me herding the cows down the lane and writing down measurements, we measured the horns of all six of our senior mamas. 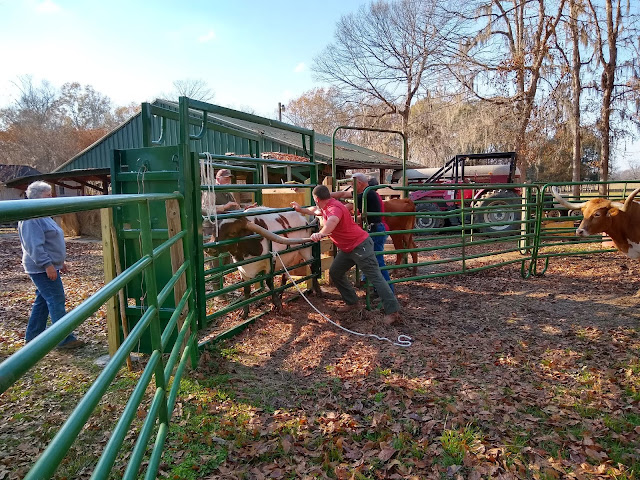 Our measurements are not "official" by the Texas Longhorn Breeder's Association of America (TLBAA) rules.  But, we did get good measurements.  So, what makes up the measurements?  There is the Tip-to-Tip (TTT), the Total Horn (TH), the Composite (COMP), and the Twist measurement. 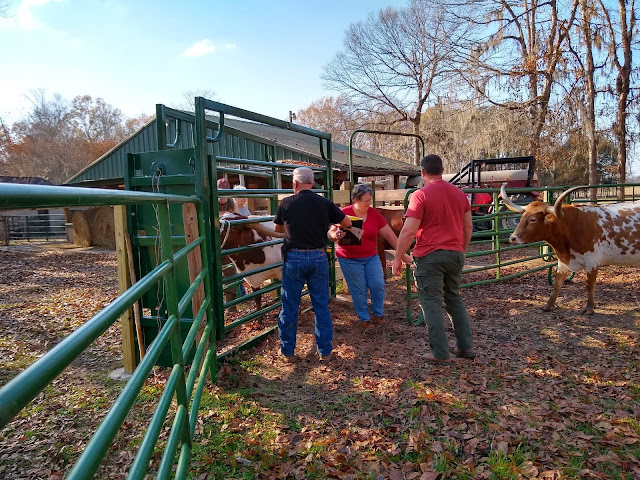 We wanted to measure Ferdinand's horns (our bull), and although he was very gentle, he was not having it!  I am glad there was no photo/video of THAT incident!  I walked him into the chute, and everything was good until he saw he was blocked on the other end.  He decided to turn around and come back out, and there was no holding him (and shouldn't have been any holding).  He pushed through my section of the fence, shouldered his way down to my dad, knocked him down with his shoulder, and then jumped over him!  There is no way you can stop an animal that large when it's made up its mind about something.  Later on, Ferdinand "jumped" the corral, coming down on the top bar with his hindquarters and smashing it.  He has a habit of jumping corral fences... 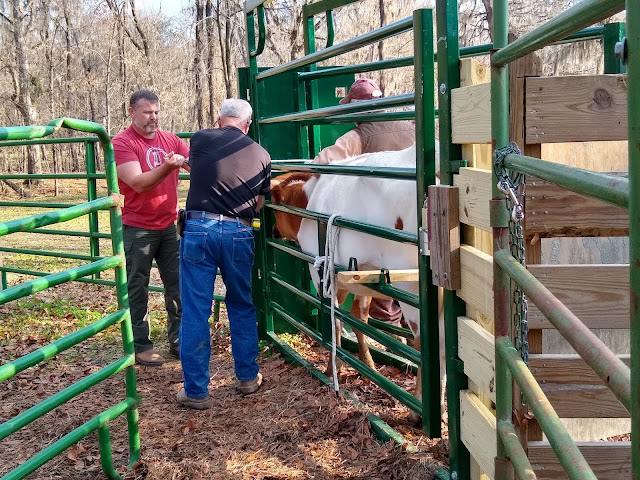 Photo credits go to my sister. 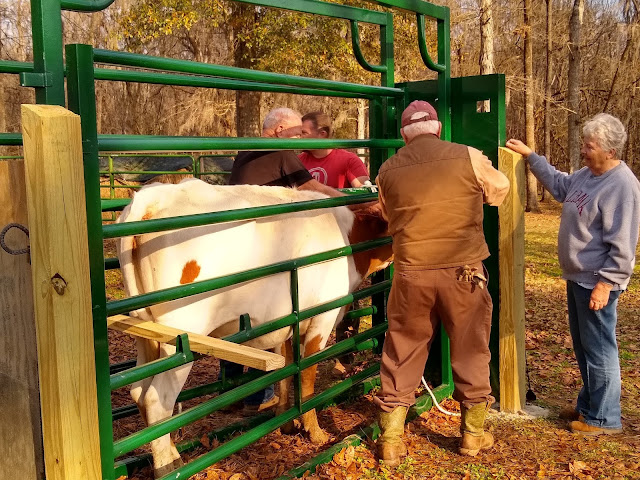 We have too much of a good thing!  It's always sad to see any of our animals go, but we would like to sell some of our "original&q...